With fewer and fewer workers covered by a defined benefit retirement plan (pension), more Americans today depend on 401(k)s and other defined-contribution plans to supply retirement income. Through disciplined and tax-incentivized savings throughout their career, many workers will have their 401(k)/IRA as their largest financial asset by the end of their career.

A tax-deferred account is tax-friendly on the front end: a tax deduction or exclusion of income in the year of contribution. It’s also tax-friendly in the intermediate years, as all investment earnings inside the retirement account are exempt from tax. Over the final stage, when withdrawals have to happen, is when income tax is assessed. It is helpful to think of a tax-deferred retirement account as though some fraction of the principal (22%? 24%? 32%?) at any time is earmarked to federal and state tax collectors. The tax advantage of having deferred savings is compromised substantially if the tax rate at distribution is greater than the rate of tax at contribution.

One key consideration in retirement planning is to minimize the rate at which taxes are paid from a tax-deferred account. Recent changes to tax law have given a more intergenerational focus to this planning. Here’s why:

The SECURE Act signed into law at the end of 2019 pushed back the age at which required minimum distributions (RMDs) must be withdrawn from a retirement plan from 70.5 to 72. Pending legislation aims to increase it further to age 75.

The tables used to calculate Required Minimum Distributions, including the most commonly used Uniform Life Table, have been updated to start in 2022. The factors are slightly larger, resulting in marginally smaller RMDs. 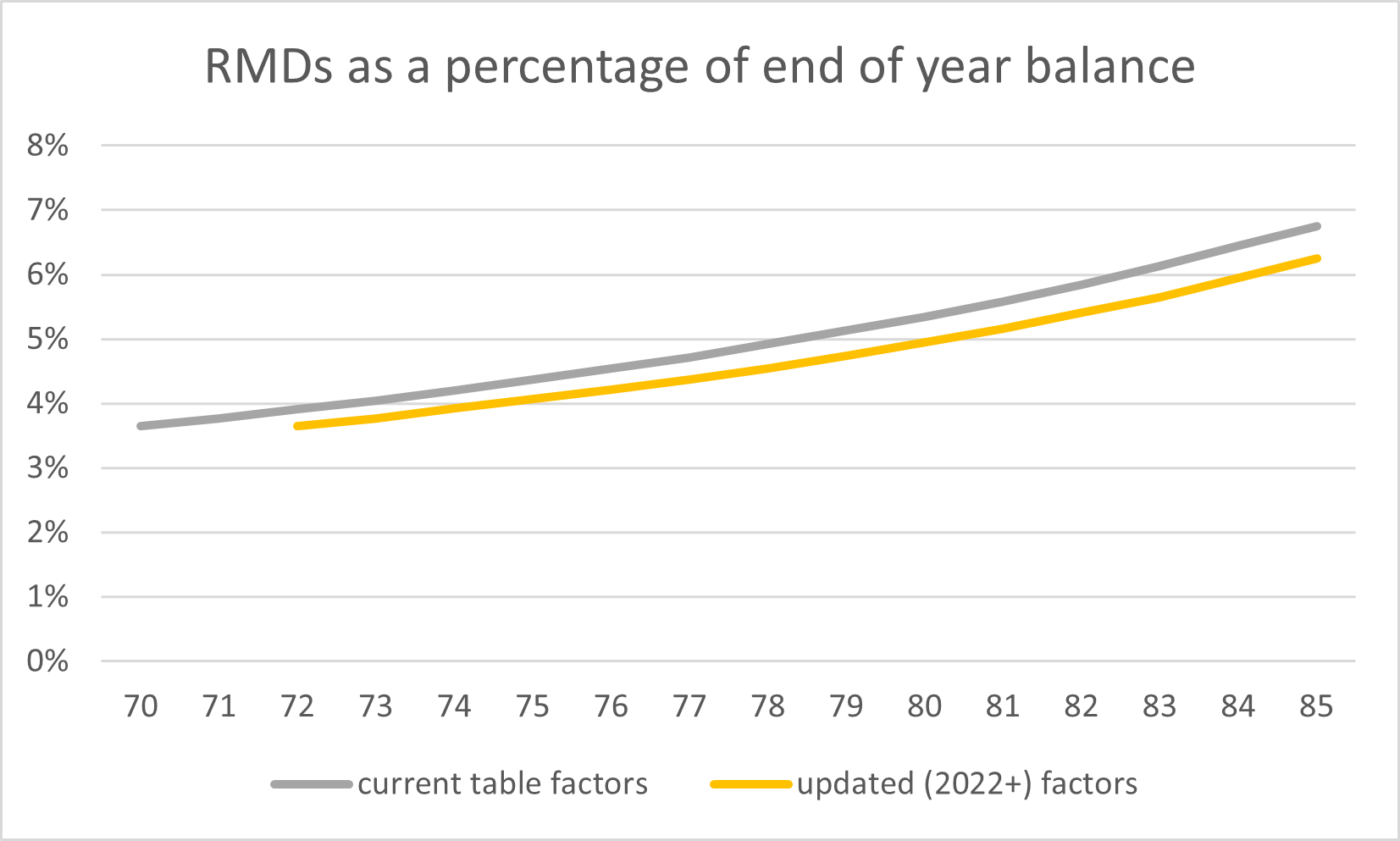 3. …but heirs take them faster

While both of the life-expectancy adjustments above effectively delay when the Treasury gets tax revenue from tax-deferred accounts, revenue accelerates in the next generation.

Most non-spouse IRA beneficiaries no longer get to stretch distributions over their remaining lifetime (using a single life table with the denominator decreasing by one each year.) Instead, their RMDs replaced by the more tax-aggressive requirement of emptying the inherited IRA over 10 years.

These changing rules, when taken together, point to a future in which more retirement assets will be unspent in the first generation and inherited by the next, which will be forced to distribute at an accelerated rate.

For example, suppose an only child of a married couple inherits a $1 million IRA in his 50s. At the peak of his career, the heir is in a relatively high tax bracket (say 32%) in a relatively high tax state (say 9.3%). Estimating the amount of distribution an IRA inheritor needs to take to evenly space income over ten years is a simple time value of money calculation similar in principle to calculating the payment on a mortgage. Using a spreadsheet or financial calculator, where rate is the rate you expect the IRA to grow over each of 10 periods: =PMT(rate,10,IRA). For example, a starting value of $1MM expecting to grow at 6% expects even distributions of $136k per year. In the example, that means that over each of the 10 years the heir must recognize $136k of additional income, taxed at least at 32% + 9.3%, if not pushed into a higher tax bracket!

What could be done to avoid this tax train-wreck?

Foresight and planning in the prior generation might have revealed that the parents were in a 24% bracket living in a tax-free state, and the opportunity then to pay lower rates and convert the retirement assets to Roth assets would be compelling. There are also estate planning implications. Perhaps there is just one child, but many grandchildren. Spreading an IRA account over more beneficiaries reduces the concentration of taxable income over a small number of years.

Starting at the age of 70.5, IRA owners can also make Qualified Charitable Distributions (QCDs) directly from their IRA to charity. Given that many taxpayers don’t benefit from taking itemized deductions due to higher standard deductions and limited state and local tax deductions, using the IRA to give money to charity is an effective way to distribute it at 0%.

Recognizing that some portion of the retirement account is due to the government leads to the objective of trying to minimize that portion. Recognizing that significant “leftovers” could spill into the next generation with more aggressive distribution requirements could justify strategies including income acceleration, broadening the pool of beneficiaries, and charitable gifting.

Want to hear more from BlueSky Wealth Advisors? Check out some of our most popular blogs below.

What is a Back-Door Roth Conversion, and When is it Right for You?

2021 Financial Forecast: A Step-By-Step Video Series to Help Guide You through the Changes Ahead